Blog Articles The Difference Between Pilates and Yoga

In my opinion, their differences complement one another in the best of ways. Pilates is known as a “workout,” and yoga as a “practice”; however, the irony here is that, in order to improve at anything, we have to practice, and when we practice well both Pilates and yoga are can be exceptional workouts.  And as you will see, both are worthy of your time and attention for innumerable reasons.

Unless you’re very familiar with both—or a trained instructor—it may be difficult to tell how these two programs are different. In truth, there is a lot of overlap and similarities between yoga and Pilates. And what better way to understand them both than with a little history lesson on each.

Pilates
Born near Dusseldorf, Germany, in 1880, Joseph H. Pilates had his challenges as a child, suffering from asthma, rickets and rheumatic fever.  His determination to heal led to his study of Eastern and Western forms of exercise, including yoga and ancient Greek and Roman exercise regimens.

By the time he was 14, Pilates had quickly become a veritable renaissance man of exercise. Accomplished as a wrestler, diver, skier and a gymnast, he was even asked to pose as a model for anatomical charts. When World War I broke out, he was interned for a year in England, and while in the camp, he taught his fellow internees the physical fitness program he had developed, boasting that they would emerge stronger than they were before imprisonment. Those who followed his program are said to have resisted the influenza epidemic that killed thousands.

Always curious and compassionate, after encountering soldiers who were disabled as a result of wartime injuries, he began devising machines using the springs from old hospital beds to facilitate their rehabilitation. These machines were the very prototypes of the specialized equipment that is used in Pilates studios today, which utilize pulleys and springs as resistance to build strength and increase overall flexibility in the spine and limbs. These Pilates apparatus, which includes the Reformer, Cadillac (or Trapeze Table), Wunda Chair, and barrels, are still used today to create a body that is uniformly sculpted, powerful and bio-mechanically efficient.

Pilates fittingly called his method “Contrology,” (the study of control) and believed that it would help people to develop the strength and fortitude in body and mind, not only to accomplish daily mundane tasks with ease, but to live life to the fullest.

“Contrology is complete coordination of body, mind, and spirit. Through Contrology you first purposefully acquire complete control of your own body and then through proper repetition of exercises you progressively acquire that natural rhythm and coordination associated with all your subconscious activities. It develops the body uniformly, corrects wrong postures, restores physical vitality, invigorates the mind, and elevates the spirit.” – Joseph Pilates

Often called a “moving meditation,” because of the incredible focus of mind on the body, Pilates is a non-impact exercise system that emphasizes alignment and body awareness. Done regularly, Pilates exercises can change people’s bodies, helping them sculpt muscles and improving flexibility. It helps practitioners develop unmatched core strength, and optimal posture. It helps to improve breathing and increases efficiency of movement.

Pilates exercises focus on the “powerhouse,” or the stabilizing muscles of the torso, which support the spine. True for exercises performed both on the mat and the apparatus, every movement one does in a Pilates workout emanates from the core, keeping practitioners “honest,” by gently forcing them to use both sides of the body symmetrically. In order to successfully initiate and achieve a movement, both sides have to participate equally, giving the dominant, overused muscles a break, and demanding that the “weaker” underutilized muscles have an opportunity to participate, hence, literally balancing the body.

Pilates is based on six principles which enable you to learn to move with maximum efficiency while minimizing stress on the body:

The yoga philosophy believes the breath to be the most important facet of health, because it is the largest source of prana, or life force, we have available to us, and when we learn to harness it, anything is possible. Hatha yoga, the primary influence in modern yoga, utilizes pranayama, which literally means “the science or control of breathing” to help the practitioner quiet the mind, embrace the present moment and manifest good health.

Achieving proper alignment in each yoga posture, and moving into greater ranges of motion while staying connected to one’s breath, challenges your comfort level and leads to transformation from the inside out; practitioners of yoga often see improvements in patience, physical strength, balance, flexibility, stress, energy levels and more.

“Yoga is not a religion. It is a science, science of well-being, science of youthfulness, science of integrating body, mind and soul.” – Amit Ray

Pilates vs. Yoga: Similarities & Differences
Many of the exercises you’ll see in a Pilates workout are inspired by yoga, and the postures in yoga are incredibly similar to the shapes and positions used in Pilates exercises. At the same time, there are exercises that are completely unique to Pilates as well as those that are specific to yoga class alone. A major difference is that in yoga, one generally holds each pose for a longer period of time, while in Pilates, you move at a slightly faster pace. Rather than holding a pose longer the way you would in a typical yoga class, staying in one position and cajoling the body into stretching more deeply through the breath, in Pilates, the practitioner dynamically extends as far as possible within a limited amount of time using resistance, core awareness and breath.

Here are some additional similarities between yoga and Pilates. 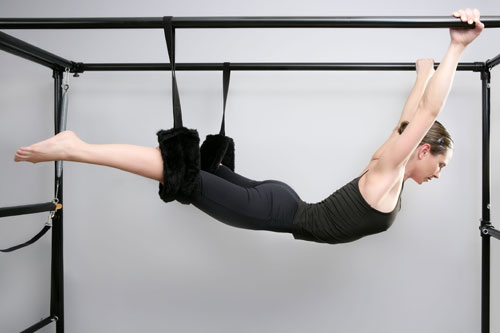 5 Habits That Will Increase Your Longevity